Isshinryu karate is a practical, straightforward system of martial arts. Based on ideas and techniques that work. Its positions are upward and mobile for quick response. It places equal emphasis on arm and leg techniques making sure the martial artists’ is well rounded and versatile. A traditional martial art for our modern needs.

Tatuso Shimabuku founded isshinryu karate in 1954 on the island of Okinawa. As a master of shorin ryu and goju ryu karate systems he took what he considered to be the best of both karate styles and created something special.

This master was born in 1908 in Chun village. He was the son of a farmer. As he was growing up, Tatuso Shimabuku showed a great interest in learning martial arts. He would continually ask his uncle who was a karate practitioner, to teach him. And eventually at the age of 8 his uncle agreed to do so.

A number of years later, as his training continued, Shimabuku would be introduced to Chotoku Kyan. Kyan was a well-known karate master of a style called Shorin ryu. The fast and direct movements where well suited for Tatsuo Shimabuku. He would dedicate himself to this art until he had mastered it. From this system he would eventual use five of the katas (forms), with slight modifications, in his future art.

The next instructor to have a profound influence on Tatsuo Shimabuku was Chojun Miyagi. His art was naha te, which would evolve into Goju ryu. The system was dynamic and powerful. It used strong stances and focus movements. Later as his art developed, Tatsuo would modify two forms from this style: sanchin and seiuchin.

Master Shimabuku’s next instructor was also a Shorinryu stylist who was a notorious brawler. Choki Motobu, nicknamed “monkey” started his training by watching his older brother being taught by their father. It was the custom that only the 1st born son would be able to learn the family art. Choki had to watch and memorize techniques and later practice them privately. Eventually he would test these techniques in actual encounters. Tatsuo refined his techniques and fighting skills with Choki Motobu

Master Shimabuku would round off his training by learning kobudo (weapons) with Tiara Shinken and Yabiku Moden.

Isshinryu karate was formally born in 1954. After 40 years of continuos training and development as well as a long contemplation, Master Shimabuku felt he had created a unique system. First teaching this art to the people of his island and then later U.S. marines stationed there. The art began to spread all over the world. 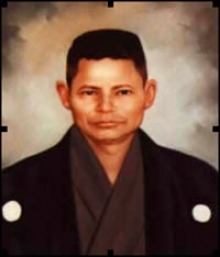